Italian designer Vico Magistretti established himself as a master of simple, elegant and even understated design solutions to domestic needs and desires. His work is driven by a passion for building off of what he calls, “anonymous traditional objects,” which he finds “extraordinary for the very fact that they are anonymous, and can go on repeating themselves in time with slight differences, because they’re basically resistant to conceptual wear. I’ve always been attracted by this kind of re-use, not least because I don’t like the design aspect to show too much.”

Magistretti got an architecture degree from the Polytechnic in Milan in 1945. In 1946 he took part in the ‘Popular Furnishings’ exhibit at the Italian Furniture Show Reunion as part of the Milan Triennale. Here he showcased a deck chair and a bookcase built of shelves suspended along two columns of metal tubing. In 1949 he was part of a show organized by Fede Cheti that included all the premiere Italian designers working at the time. Magistretti’s contribution to the show included a bookcase designed like a ladder, leaning against the wall and a small, stackable table, which was subsequently put into production by the Italian company Azucena. The goal of the company, and of Magistretti himself, was to produce quality modern furniture that could begin to coexist alongside the antiques filling most Milanese apartments.

During the 1950s Magistretti did a lot of architectural work, including an office building in Corso Europa and the Villa Arosio. He expressed a dislike for “designing Countess So-and-So’s drawing room, or Mr. Whatsit’s dining room chairs” and preferred to design with his own home in mind, and to think of his designs as “autobiographical, like a diary or a little private world.” In 1959, however, as an offshoot of a public commission to design the Carimate Golf Club, his simple “Carimate” chair became a popular icon of design into the 1960s. Magistretti probably enjoyed this commission immensely, since he was an avid golfer and developed several sketches for new golf clubs and bags, none of which were ever put into production. The chair was a successful marriage of rural materials- a wooden frame with a rush seat- and bright, modern paintwork and gloss finish. In 1962 Cassina began producing the chair and ushered in a long era of collaboration with Magistretti.

In the sixties he began to work in plastic, expanding on the prevailing structure of chairs and tables built from a single piece of reinforced resin. Some of his important innovations in plastic are the use of S-shaped legs for maximum support without breaking the integrity of the singular piece, and the technique of thickening the plastic to reinforce the areas that receive more stress. Magistretti also designed “softer” armchairs like the “Maralunga” chair (1973), which features an adjustable headrest. His paean to the “anonymous object” is his “Sinbad” armchair and sofa (1981) with an informal, cozy quality achieved by its English horse blanket throw-over cover. He wrote that when he saw the traditional blanket he thought it was “so beautiful that I’d like to add four buttons and sit down on it.” He is also known for his lighting fixtures like the “Atollo” table lamp in painted aluminum, which won the Compasso d’Oro award in 1979 and was featured in the MoMA’s fiftieth anniversary calendar. 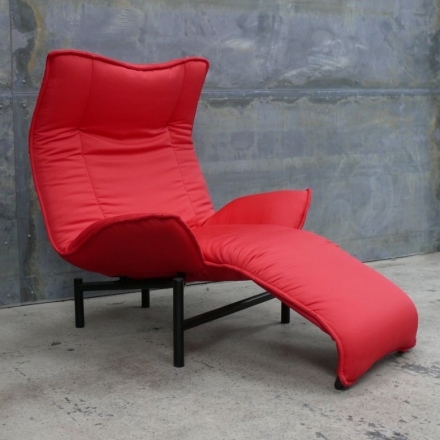